Call them what you want (normally trackie bottoms or joggers in our house) – I can barely bring myself to type the word ‘sweatpants’. 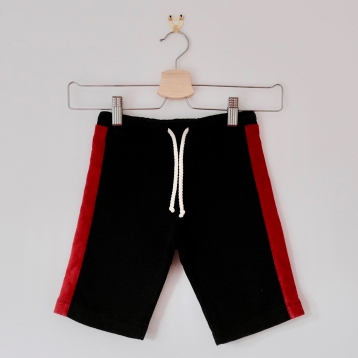 If you have a son aged between 2 and 12, he probably has tons of these in his wardrobe. Perfect for playing, playdates and hanging round the house, they’re comfy, cosy and won’t need replacing the instant he grows half a centimetre. (Obviously they’re perfect for daughters too, but most of my son’s female classmates seem to wear leggings rather than tracksuit bottoms. Can any parents of girls tell me why this is?)

My 4-year old son requested a pair of these with the Adidas-style side stripes, in a colourway that was impossible to find in RTW, so I offered to make him a pair. And that’s when the demands began… “Mummy, can I have two pairs? Mummy, can you make some shorts too? Mummy, can I have  them in orange/dinosaur print/with the Octonauts on them?”

Eventually we settled on two pairs – one trousers and one shorts in the opposite colourway. (Note: we ended up making a third pair too – the red shorts with the black stripe in the action shot.)

The pattern and the fabric

These are the Oliver + S Parachute Sweatpants (the pattern also includes a polo shirt that I haven’t made yet). As with the other Oliver + S patterns I’ve tried (coat, hat, t-shirt), this was a lovely experience. It’s a fairly simple make, with hacking options to keep more experienced sewers interested, and the instructions are nice and clear with plenty of detail for people new to sewing knits.

There’s a full sewalong if you need extra hand-holding, and a forum on the website specifically for discussing this pattern, so there’s lots of help on offer for newbies. We used one of the tutorials to add pockets to the third pair.

The side stripe is part of the leg piece, rather than added on top, so if you want to make them without the stripe, you’ll need to add extra width to both leg pieces.

I wanted a French Terry for this pattern, and Stof and Stil had the best selection of solids I could find. It’s all cotton, and lovely and soft on both sides, so ideal for smaller ones or children with eczema. Plus the colour didn’t run in the pre-wash – hurrah! On balance, I’d say it’s probably not quite stretchy enough for the pattern, so you might need to size up – we sized up for the red shorts and they’re a better fit in this fabric.

Generally Oliver and S patterns seem to include less ease than, say, Ottobre, so do measure carefully – and if your offspring are between sizes or you’re using a less stretchy knit then definitely pick the larger one.

I cut the size 5 for my almost 5-year old son (the red shorts are a size 6). He wears age 5-6 RTW trousers at the moment, but they’re often loose around his midsection. I added around 1″ to the leg length and roughly 1cm to the back crotch length.

I used the overlocker for as many seams as possible, just bringing out the sewing machine for topstitching, hemming and installing the waistband – where I wanted a bit more precision. For the red stitching, I tried using some stretch thread I had lying around, which was great for the topstitching, but didn’t work out so well on buttonholes or the hem – stick to regular thread for these.

There was only one modification, which was to replace the elasticated hem on the trousers with an ordinary twin-needle hem. Largely because my son probably wouldn’t have stood still to be fitted for them, and I’d had enough of faffing with elastic by the time I’d finished the waistbands.

It was Kids Clothes Week when I made these (I know, I have a ‘backblog’…), so for fun (!) I measured out my time in seven one-hour units. At the end of the week I still hadn’t finished, so I thought I’d keep timing myself. In the end it came to nine hours. NINE hours – for one pair of knit trousers and one knit shorts. I’d altered the pattern and prepped the fabric beforehand, but otherwise all the time I spent on this is included – cutting out, setting up my machines, pressing, switching thread colours, stitching. Plus 30 mins trying to work out why I couldn’t sew buttonholes in a knit (tip – as well as interfacing the fabric, try putting tissue paper underneath the fabric to help it move smoothly under the buttonhole foot).

Nine hours seems like an awful lot to me. I know I sew slooooowly and this pattern was new to me, but still. Having once worked in a job where I had to account for all my time in 6-minute units, one of my favourite things about sewing is that I set the deadlines, timescales and schedules. But I wonder if I’ve perhaps taken this too far, especially given that I’ve got more things on my to-sew list then in my wardrobe!

What could you run up in nine hours?

So someone's cloned my Instagram account... 🤬 If you've recently been followed by a similar-looking account to mine, which is using a profile pic that's of me, and the same description with a bonus typo, be wary – it's not me, so don't follow back and please don't open any DMs from them.
Having a bit of a clear out here at DIY Wardobe HQ. Due to overlapping subscriptions (courtesy of my kind in-laws!), I’ve got four duplicate Burda magazines in my collection. Would any Burda fans out there like to have them? Free to a good home - I’ll happily post them to the first reply from someone based in the UK who was already following me before today. They are May 2020, December 2020, January 2021 and February 2021. #payitforward
These are my #gingerjeans from 2017, which I don’t wear because the zip won’t stay up! Is this a fit issue, or is it the way I’ve installed the zip? And most importantly, what’s the fix for it? Thank you 🙏 #sewingrepairs #memadejeans #diywardrobe
Orange? Why not. Although not for me. 😬. A spot of secret squirrel sewing for someone with an 8th birthday coming up soon who will keep on growing out of all his shorts.. #neonnotions #sewingforkids