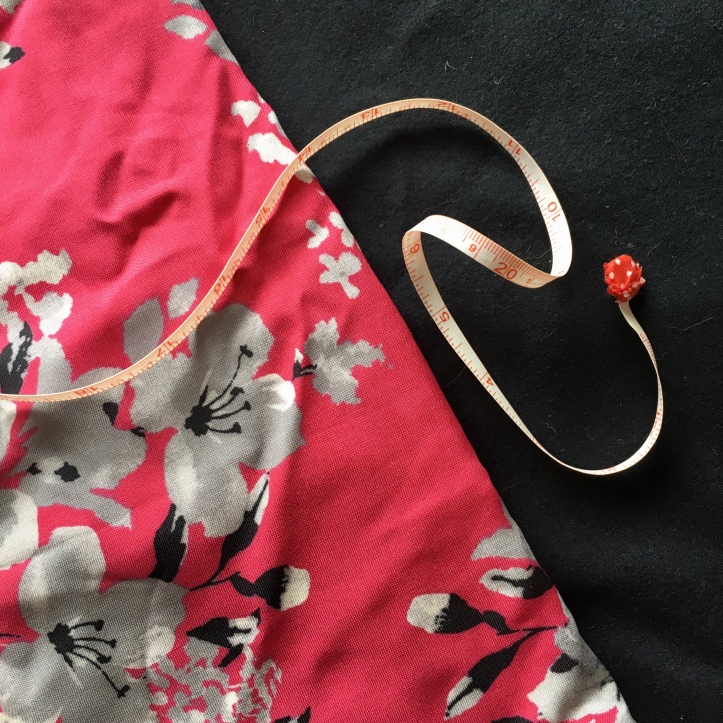 So it seems I might have a bit of a thing for making coats… I’ve just embarked on my fifth!

I spent most of the autumn pondering and hunting for my perfect coat, and then – bam – By Hand London released the Rumana pattern just before Christmas and that was it. I love everything about this design, but I’m especially enamoured with the longer-than-hip-length, the back shoulder darts, the wide lapels and the princess seaming.

All the other patterns I’d considered (strong contenders were Lisette for Butterick 6385, McCalls 7058 – inspired by Sew Manju’s lovely version, and an improved version of my pre-blog New Look 6006) just weren’t quite right, and I didn’t feel like making design alterations as well as the inevitable fitting alterations.

So Rumana was the one for me. I’ve chosen some inexpensive midnight blue wool melton for the shell and a loud hot pink floral viscose challis for the lining. That’s me all over – sensible on the outside…

This project isn’t the kind of thing you can knock up in a weekend though. There are 25 pattern pieces, a notched collar, and it’s a close fit on the upper body. I haven’t sewn a BHL pattern before, and since I’ve shelled out nearly £80 on the fabric alone I wanted to make a toile to test the fit. Using a weird mix of leftover coating scraps and calico I sewed up the shell – including the pockets and one sleeve but leaving off the collar.

These pictures were taken after I made the fitting alterations

You can really see how lopsided I am in this picture – the whole centre back seam is leaning. Luckily it never looks quite this bad IRL.

What did I learn?

After all that, I started examining the button placement and the roll line for the collar. My tailoring knowledge is pretty basic, so I’m not sure yet whether I’ll attempt bound buttonholes or chicken out and make a belt closure or covered poppers instead – both of which could be done at the end of the process instead of near the beginning.

The pattern instructions don’t mark or mention a roll line, but my tailoring reference book is adamant that marking and taping this is vital, so I haven’t worked out what to do about this yet, or how it’ll be affected by the FBA…

I’m going to try not to be too perfectionist about this make and just aim to make a better-structured, better-fitting coat than my last one. Oh, and to get it finished before the weather gets too warm to wear it – wish me luck!

Aaargh. 😱🤬😫
So someone's cloned my Instagram account... 🤬 If you've recently been followed by a similar-looking account to mine, which is using a profile pic that's of me, and the same description with a bonus typo, be wary – it's not me, so don't follow back and please don't open any DMs from them.
Having a bit of a clear out here at DIY Wardobe HQ. Due to overlapping subscriptions (courtesy of my kind in-laws!), I’ve got four duplicate Burda magazines in my collection. Would any Burda fans out there like to have them? Free to a good home - I’ll happily post them to the first reply from someone based in the UK who was already following me before today. They are May 2020, December 2020, January 2021 and February 2021. #payitforward
These are my #gingerjeans from 2017, which I don’t wear because the zip won’t stay up! Is this a fit issue, or is it the way I’ve installed the zip? And most importantly, what’s the fix for it? Thank you 🙏 #sewingrepairs #memadejeans #diywardrobe