The idea for these came about last summer, when I was sweltering at Paddington station in 34 degree heat after a work meeting. All I wanted in the world was a pair of linen trousers so I could stand over the tube air vents without exposing myself to West London’s commuters!

I’ve been wanting to have another go at trouser fitting, using what I learnt on last year’s Project Ginger Jeans, to tackle a woven fabric. This pattern (Simplicity K1699) came free with a sewing magazine ages ago, and I initially overlooked the trousers because they were tapered and I usually wear straight or wide leg shapes. But I relented and decided to try this one because they’re such a simple shape with virtually no bells and whistles to add complications or volume at the hip.

As drafted, there’s a self-faced waistband, a side lapped zip and two darts – one at the back and one at the front. I didn’t need the front darts, so these have gone, I opted to use a Petersham facing for the waistband, and I switched to a centre back invisible zip on the advice of Pants for Real People. I added some more width through the leg, but not enough to qualify as a straight leg, and I ended up shortening the inseam to around 27″ to create a cropped style – not entirely on purpose…

I love working with linen, but I’m less keen on the creasing, so I chose the Robert Kaufman Yarn Dyed Essex Linen fabric in the steel colourway. It’s a soft, dove grey, and should make a lovely neutral for the summer months. The fabric frays like b*ggery, but then that’s linen for you – staystitching the waistline will help prevent you losing an inch off it during fitting. It presses beautifully, and the cotton component (45%) helps to reduce the creasing.

It’s only 115cm wide though, and mine shrank a full 10% in the wash, so make sure you get plenty…

I bought 2.5m, needing 2.3 to make the trousers, and then stupidly added extra-large seam allowances for fitting as well as my usual 2-4″ to the length. I thought I’d cracked it by cutting on a single layer, but actually made a stupid mistake with the layout and ended up about 10cm short. So cropped trousers weren’t entirely a design choice!

I gave the tissue fitting method a try this time. This pattern’s perfect for it because it doesn’t have a separate waistband piece or pocket pieces to faff with, just a regular front and back. Plus the waistband hits at the natural waistline so it’s easier to spot any shortages in crotch depth or crotch length.

I didn’t find it all that easy – there were plenty of issues in my first toile that I hadn’t solved in the tissue fit. But it probably does save one toile in the process.

The fitting adjustments I made – in this order – were:

Hopefully now you can see why this has been an ongoing muddle since September! I’ve not got the back darts completely right, but it was time to stop fiddling and start wearing. 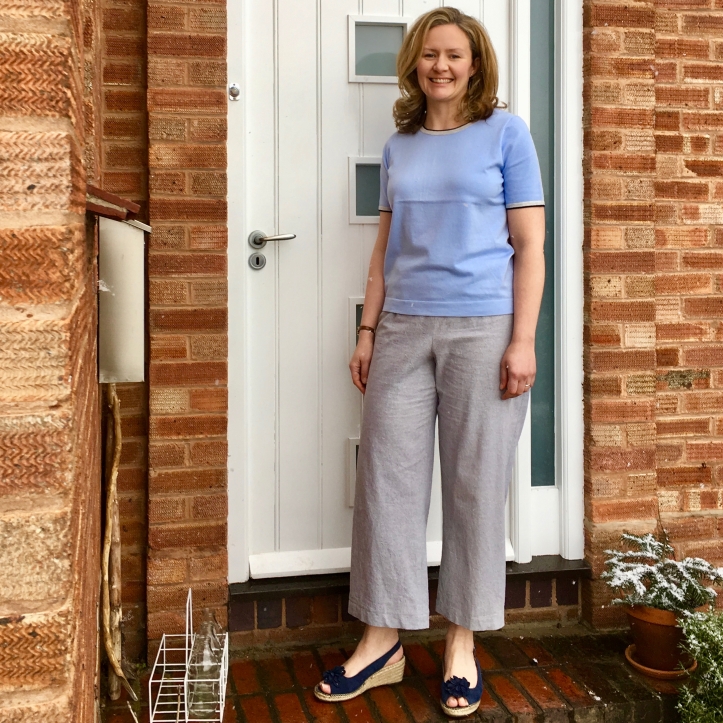 Looking back at these pictures I like the idea of this style more than the reality, but I can see them getting lots of wear on British beaches in the summer month.

Trouser fitting is still the thing I most want to crack, yet still the hardest thing for me to do. I’m heading on a jeans-making course in March, so I’ll be facing up to it again then. After that I might look at developing a trouser block I can re-use for lots of different patterns.

Have you developed your own trouser block? And how do you then use it to adapt commercial patterns to fit you?

I’ve finished something – hurrah! This shirt for Mr Wardrobe has been a long time coming, but it’s finally done. I’m still not sure if it’s going to get worn though – it might not be his style any more! More details, and a handful more pictures are now on my blog (link in profile)  It’s a @threadtheorydesigns Fairfield shirt in lovely organic cotton gingham from the Organic Textile Company and @thedrapersdaughter.  #sewingblogger #sewmenswear #fairfieldshirt #wearhandmade #handmadewardrobe #sewcial #worcestershiresews
I’ve never used one of these before! Any tips welcome 🙏 #rotarycutter #dosomethingeverydaythatscaresyou
I didn’t much feel like knitting on holiday this year so I took something a bit different and even slower... #worcestershireemblem #embroidery #tinystitches
Anyone else got that back to school feeling at the moment?  It’s inspired me to get a move on with the next step in my #curatedcloset project – analysing how I spend my time and how my wardrobe matches up to that (spoiler – it doesn’t!) Plus my inner geek loves a good pie chart. 🤓  More info and chat about what it means for my To Sew list can be found in a new post on my blog, along with the other posts in my Curated Closet series so far – link in profile. Where are the biggest gaps in your wardrobe right now?  #backtoschool #wardrobeclearout #slowfashion