My little boy LIVES in T-shirts. He doesn’t have to wear a uniform for pre-school, so he puts on a t-shirt pretty much every day. Although he’s not quite four, he wears age 5-6 clothes so he’s grown out of some of the really fun prints and appliques you find for toddlers.

And although t-shirts can be found pretty cheaply on the high street, it’s really hard to find t-shirts for boys his size that feature something other than dinosaurs, sharks, superheroes, stereotyped messages, camouflage or vehicles. And in our house, we’re sick of all of those. For a  t-shirt that doesn’t feature any of these, the going rate seems to be £15 and up.

In my head, I think I should be the sort of mother who can easily whip up a batch of neatly made t-shirts with a custom fit in a selection of fun fabrics. It doesn’t seem to be that easy, but here’s my latest attempt.

This time I tried a dropped-shoulder, long-sleeved t-shirt pattern from Ottobre Kids issue 2015/1  on the site. My little boy has narrow shoulders and I wanted to see how a dropped-shoulder style would look on him. 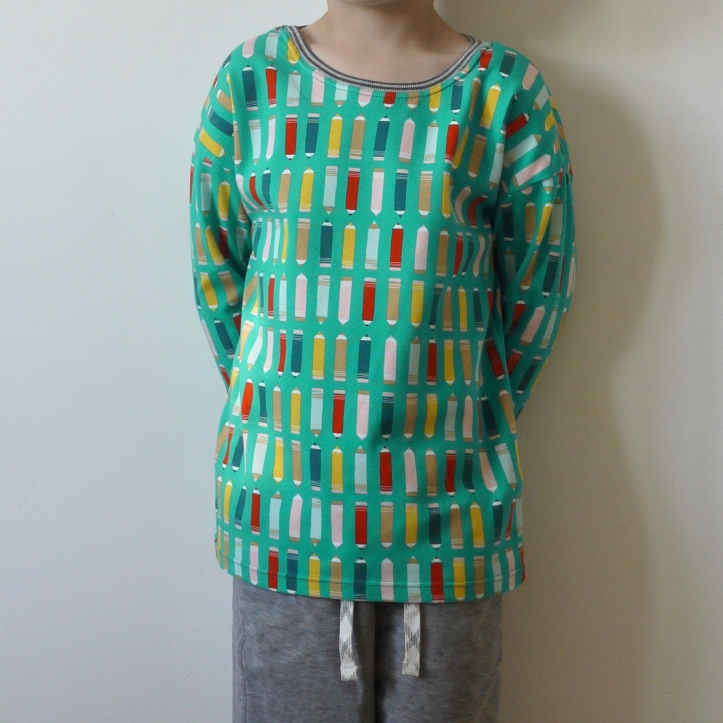 I cut the pattern with no alterations to see how it would fit straight out of the envelope, and it turned out oddly long in the arms, so I think the shoulder was too wide still. It’s a little large on him, but the weirdest thing is that the neckline turned out a lot wider than you would usually get on a boys’ t-shirt. (Are Finnish children oddly broad in the shoulders with thick necks?) So I won’t use this pattern again for George.

How cute is this print for a pre-schooler? It’s by Rae Hoekstra, and it’s from Cloud 9 Fabrics’ 100% organic cotton jersey range. I’d say it’s a medium-weight jersey – almost interlock weight. And I think Rae has even used the other colourway to make an Astoria sweatshirt. It was £9.50 per half a metre, but I was hoping I would get something that would last a long while.

The downside of using 100% cotton, of course, is that without some spandex content, the fabric doesn’t have great recovery. I did know this, but I got distracted by the lovely print and forgot. It’s also printed just ever so slightly off-grain – aaargh! Not a lot, but when I thread-traced down the grainline it definitely shifted across the print by around 1cm over 1m. Disappointing, at £19/m.

I cut the pieces so there would be a complete line of pencils along the hem, and along the sleeve hems, and then sewed it up on the overlocker. As with the last Ottobre T-shirt I made, I ran into trouble with the binding. I’d love to know what I’m doing wrong here, but the pieces didn’t seem wide enough to do the job properly, and when I stretched both fabrics to sew it on as per the instructions, the cotton jersey didn’t recover and I ended up with a sort of lettuce edge on the neckline and both cuffs…

The sleeves were too long anyway, so I cut the binding off and just did a simple folded hem instead. (Well. I say simple, but the cuffs were too narrow to go around the 12″ circumference free arm on my machine, so I had to negotiate sewing them from the inside while stabbing myself with all the pins…)

To get the neckline back into shape, I ripped out the binding and switched it to a band instead. Then I washed and steamed the shirt furiously with the iron to get it to shrink back again. It seems to have worked, at least for now.

George loves the print and he’s got it on today, so I hope it’ll be popular.

Have you made t-shirts for your children? What fabrics and patterns would you recommend? And where can I source fun t-shirt prints that have enough stretch and enough recovery?

These are my #gingerjeans from 2017, which I don’t wear because the zip won’t stay up! Is this a fit issue, or is it the way I’ve installed the zip? And most importantly, what’s the fix for it? Thank you 🙏 #sewingrepairs #memadejeans #diywardrobe
Orange? Why not. Although not for me. 😬. A spot of secret squirrel sewing for someone with an 8th birthday coming up soon who will keep on growing out of all his shorts.. #neonnotions #sewingforkids
When it takes you so long to get around to your mending that the original garment has faded in the wash...
I haven’t been feeling very Instagrammy lately - a combination of the lockdown situation and a busy time at work. But the springier weather is helping so here’s something I made earlier I can share.