This has been a long time coming, but my first-ever pair of Ginger jeans is finished. And boy, am I pleased with the results!

I’ve been after a pair of high-waisted flared jeans for ooh, about forever. And I finally gave in and decided I was going to have to make them myself.

The fabric is a lovely, soft, true blue stretch denim that I bought from Guthrie & Ghani last year in just the right weight/stretch combination for this pattern. One word of warning – if you’re long-legged, want to try the flared adaptation, or are planning to use extra large seam allowances to help with fitting, then buy more fabric than the skinny-legged Gingers pattern suggests. The cutting layout isn’t all that flexible because the denim has to be laid a certain way to prevent the legs twisting. I had 2.5m of 60″/150cm wide denim and that was only just, just enough.

For the pocket stay and waistband facing I used a polka dot Sevenberry cotton lawn in teal, also from Guthrie & Ghani, leftover from these Thurlow trousers. 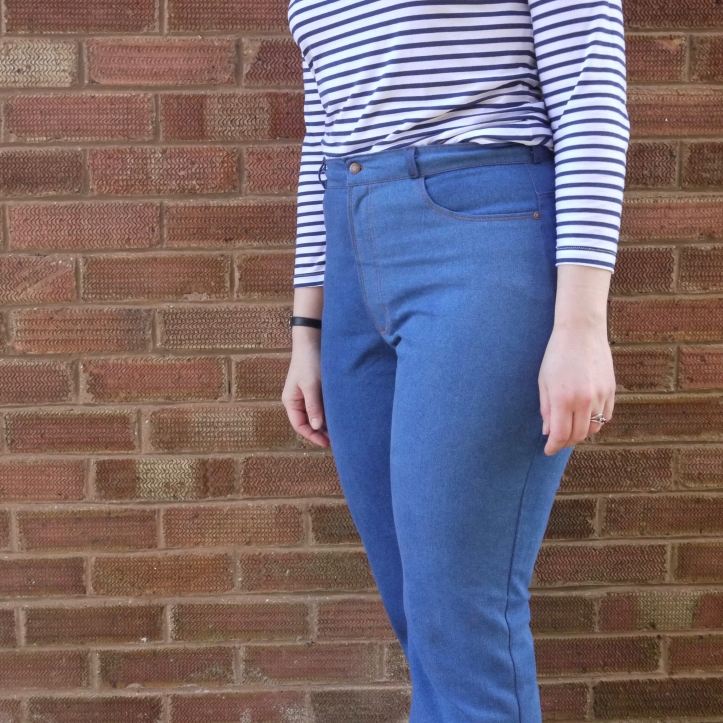 The fitting process has turned into a real quest for me. I began sewing all those years ago because high street trousers didn’t fit – and having gone through this process I now know why! I must have taken them on and off at different stages of construction at least twenty times, so if you can spend a whole day sewing in just your underwear (!) you’ll probably get them finished a lot faster than I did.

I started with the size 16 to fit my 43″ hips, and graded down to a 14 at the waist at the same time as flaring the legs from the knee. I then lengthened the crotch depth by 1″ and also checked the total inside leg against my own measurements. These are my standard alterations for any pattern, and I usually find it’s fine to make these straight on the pattern without doing a toile/muslin first.

Taking a tip from Pants for Real People, I also enlarged the seam allowances to 1″ rather than 5/8″ at the inseams and outseams before cutting out to give me plenty of room for alterations. This was a complete lifesaver – and you should absolutely do this if you’re about to cut into good fabric for your first pair.

The first, second and third fittings showed up lots of issues, so I then also made the following adjustments, one at a time:

I discovered I have what Pants for Real People creepily describes as a ‘crotch oddity’, in that I’m low in the back and high in the front. If this is you, you’ll notice that your RTW trousers always seem to either drag down at the back or disappear into your bum crack, yet you might also have some weird puffiness in the front crotch.

I didn’t have wide enough seam allowances to make the front crotch seam as shallow as I wanted, but it’s good enough – and I’ll know for next time.

*You can’t really tell in these pictures, but my right leg is around 1.5cm shorter than my left, and my pelvis is also smaller on the right side. This means I make side seam alterations unevenly, taking slightly more from the right side than the left. Plus I ended up placing the back pockets by eye, rather than using the pattern markings, so that everything looks more balanced and even. 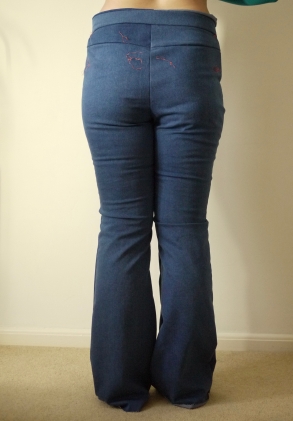 Compared with the fitting, construction was – almost – a breeze. Heather’s instructions (I used the E-Book) are clear and logical, so it doesn’t feel as daunting as you might expect. You absolutely can make jeans.

My Janome DKS30 didn’t much like doing dense stitching with topstitching thread through multiple layers. It really hated backstitching and bar tacks through more than 3 layers. If you have the same problem it’s worth buying a regular thread in the same colour as your topstitching thread and trying the bar tacks with that instead. I did this on the belt loops and it made things easier – it worked better than switching stitches, or changing needles. I also did a fair amount of the backstitching using just the hand wheel, and avoided the automatic thread cutter. Next time I might get my vintage Singer 201K out for the topstiching, although she doesn’t have a zig zag stitch, so I won’t be able to use her for the bar tacks.

What my machine does have that helped a lot, is a small black button on the presser foot which fixes the angle of the presser foot, even when you’re starting at a thick edge. This meant I got away without using a hump jumper.

You press the black button as you lower the foot (it does help if you have three hands), and then begin sewing as normal. The presser foot will stay level even if you go over a hump, and *should* hold a fairly even stitch.

I used my overlocker (serger) to finish the seam allowances for speed, but it protested at anything more than three layers of denim, so I also employed the overedge stitch on my ordinary sewing machine. This is a really secure way to finish fraying fabrics, and it comes into its own when you don’t want to cut anything off – for example if you’re going to use that edge to line up something else.

The Prym rivets and jeans button kits I bought did turn out to be partially plastic, but they’re holding up well so far. (I’m probably going to live in these jeans for the next month or so, and the proof will be in how much pudding I can eat in them!)

The rivets were really fun to put in, and the only casualty was one of my thumbnails which accidentally took a battering when I got distracted by the doorbell…Can any UK sewists recommend a good source of metal ones for me?

If you’ve been hesitating about sewing jeans, I’ll be honest with you. No, it’s not as quick as a skirt or as easy as a jersey top.